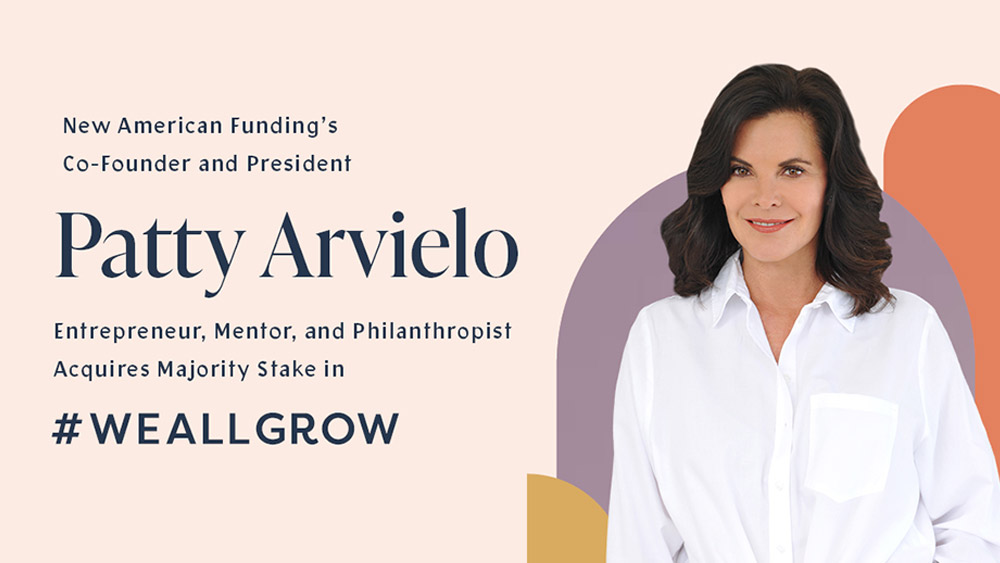 Patty Arvielo is a self-made success story. After establishing a flourishing career in the housing industry, Arvielo co-founded her own business, New American Funding, which has since grown into the nation’s largest Latina-owned mortgage company.

But Arvielo is not one to rest on her laurels. Rather, she believes in supporting the next generation and helping them chart their own path to success. To further that mission, Arvielo acquired a 50% majority stake in #WeAllGrow Latina, a community of thriving Latina creators, makers, and entrepreneurs, to help supercharge the group’s mission of supporting and uplifting Latinas.

Founded in 2010, #WeAllGrow is the largest and most established community of Latinas online. The group works to elevate Latinas’ voices and stories via the power of community through virtual and in-person gatherings and culturally relevant content and tools to increase visibility and grow Latinas’ social and economic power.

Arvielo is dedicated to uplifting Latinas, which is why she made this investment.

“#WeAllGrow’s philosophy is: ‘When one grows, we all grow.’ I strongly believe that as well,” Arvielo said. “Now is the time to step up and lift other Latinas too, so they can create their own empires. I’m ready to help build a generation of Latina millionaires.”

As part of the deal, Arvielo will share her 40 years of expertise with #WeAllGrow’s members through various formats.

“We feel incredibly grateful to have Patty supporting our vision as we take the next step forward,” #WeAllGrow Founder and CEO Ana Flores said. “Patty is one of the most successful Latina entrepreneurs and her story is one we can all aspire to.”

This is Arvielo’s second investment in the Hispanic community this year. Arvielo recently invested in Encantos, an award-winning educational technology company that focuses on bilingual education.